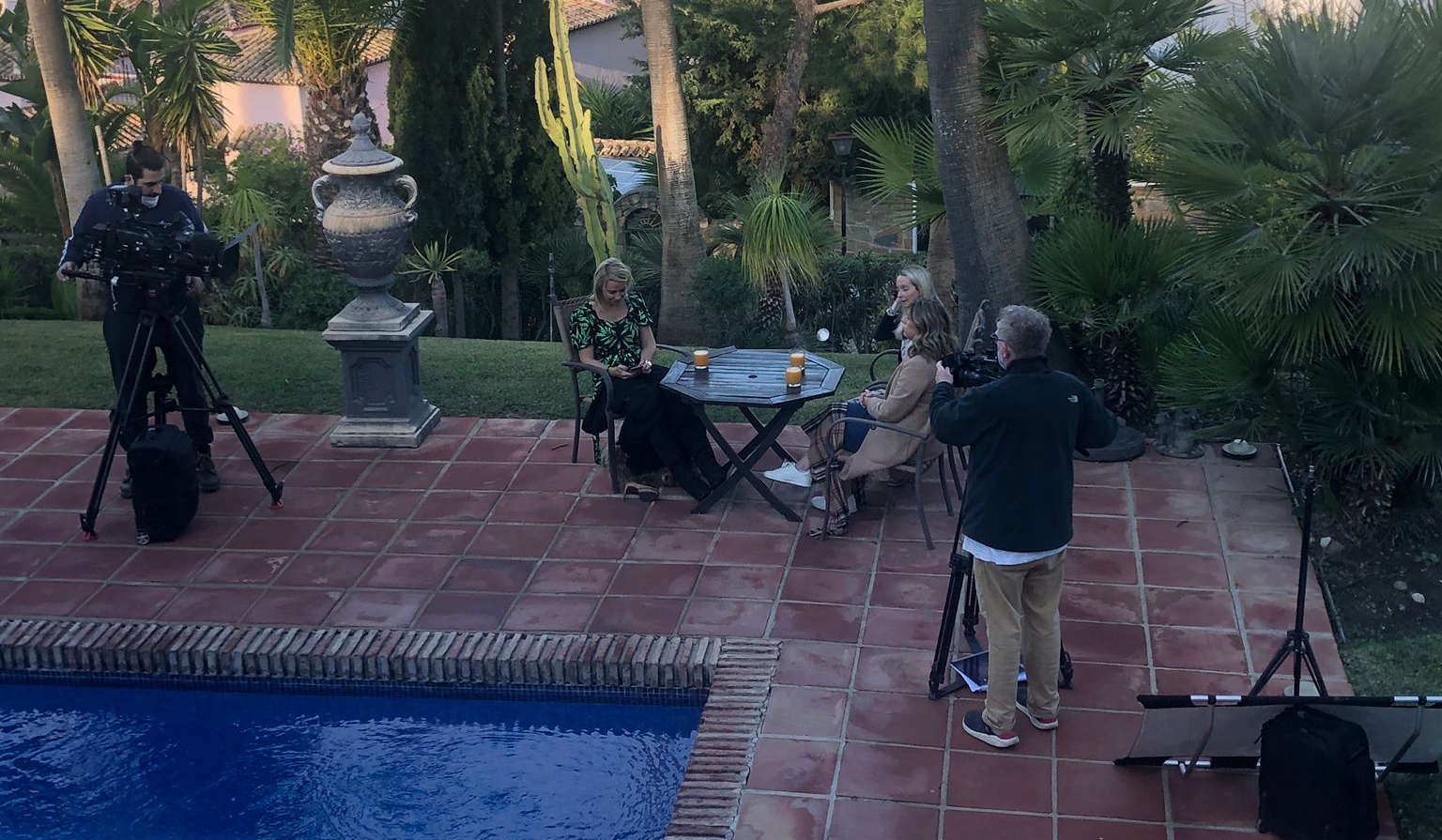 So finally, we can tell you about a very exciting week we enjoyed back in November 2021.

We had been contacted by the very popular UK television show called A Place in The Sun who were bringing over a client looking for an apartment in or around Estepona. The client’s budget was completely unrealistic for what she was wanting but the show’s producers were keen to show her what she could get for her money in our area.

The producer flew over to Spain and looked at a couple of studio apartments, shortlisting one of our favourites in Paradise Club. On the top floor of the building overlooking the pool, it had the most ingenious swivelling foldaway bed I’ve ever seen, was nicely presented and quite homely. A couple of weeks later we were contacted to say they’d like to include it in the programme. The owner was ecstatic!

After a flurry of paperwork, it was time to meet the crew so they could film their “client” looking around the property. Client Jenni was lovely and had bought along her best friend for moral support and advice. We loved that the client wasn’t allowed to see the apartment before the cameras were rolling to capture her unfiltered first impression (although that presented a challenge when we had to find her a bathroom to use before filming commenced!). Unfortunately, the property was too small for her – she was looking for a two-bedroom apartment close to amenities. Right location, wrong size! Still, it was a great experience for us, and we got on really well with the presenter Laura Hamilton, the mainly Spanish crew and the clients!

But, as it turned out, that wasn’t the end of our A Place in the Sun adventure!

Later that night Charlotte received a slightly panicked phone call from the producer to say that plans to film a luxury villa the next day had fallen through and asking if we knew of a suitable property they could use, that was available the next day! Of course we could help!

After a few quick phone calls to the owners of a stunning villa in El Paraiso Medio, we managed to secure an appointment for the film crew, presenter and Charlotte to start filming the following day. The owner was in Portugal and leapt in her car to drive back from Lisbon through the night so that she could be there to let us in and make sure the villa was looking its best. She was amazing, and really the perfect hostess, squeezing fresh orange juice for all to enjoy, chatting away and making everyone feel very welcome in her home as well as giving countless tours of the different areas of the villa – all with very little sleep!

It was a long day and the crew returned the next day as well to film some extra shots in the garden, cinema room and spa. They also used the garden to film the final round up of the programme where the presenter finds out if the clients are going to make an offer or not. Again, we were surprised to learn that this isn’t staged at all! The presenter has no idea if the clients will make an offer or not and makes the all important phone call to the agents there and then!

After all the buzz of filming, it felt like a very long wait until the show was aired last week on 27th July. Time for nerves to intensify (Did I say the wrong thing? Wear the wrong clothes?) but we’re very happy it’s out there now for all to see! El Paraiso and Benavista looked as beautiful as ever in the footage and we are very proud to have been involved.

Thank you to the team at A Place in the Sun for trusting us to take part in their programme (and to Laura Hamilton for making Charlotte’s children’s year by recording them a special, personal message that they’ll keep forever!).

Paraíso Real Estate is the leading company in the El Paraíso area with over 20 years’ experience and extensive knowledge of all properties in this area.

Get more information on our latest properties and new developments